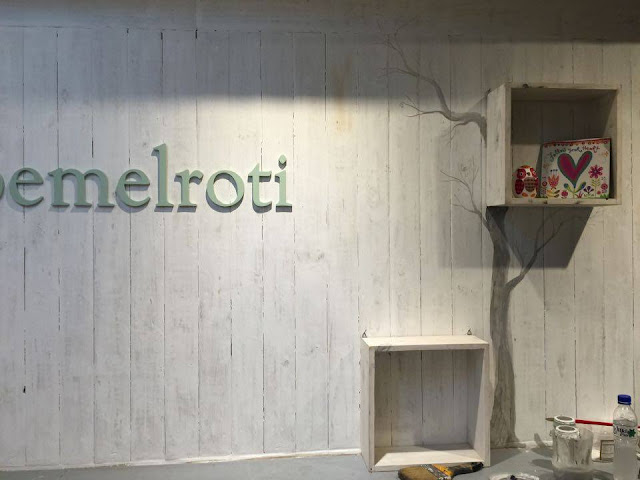 We wanted a "breathing space" at the new stores, and that is the reason for the sign /mural behind the counter at new Papemelroti stores. 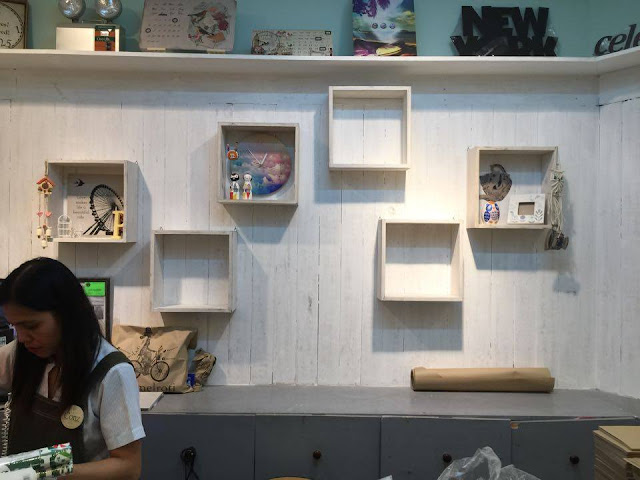 We begin with "the givens". In our Glorietta branch, we have an unusually large area (2 walls actually) behind the counter. Robert decides that one wall will have mural that incorporates some box shelves and the other wall will have the Papemelroti logo / brand. 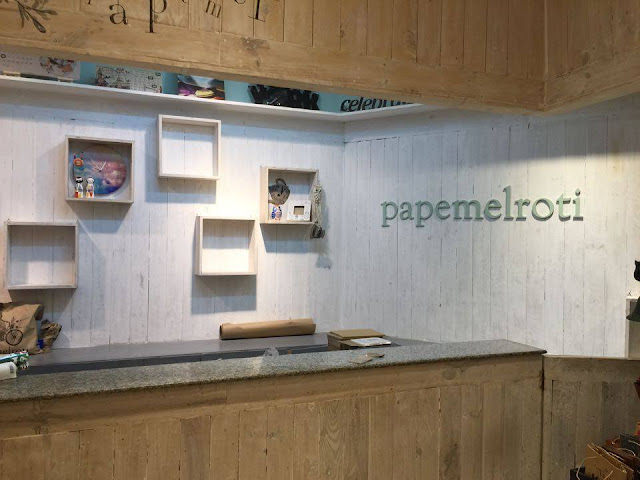 At this point, Robert "visualizes" what he would like to see when the mural / walls are finished. It helps to look at the walls at a distance and most specially from the view of the customers in the store. Robert arranges the box shelves according to the mural he visualizes. Robert has decided he will have a big tree with box shelves with it's branches. 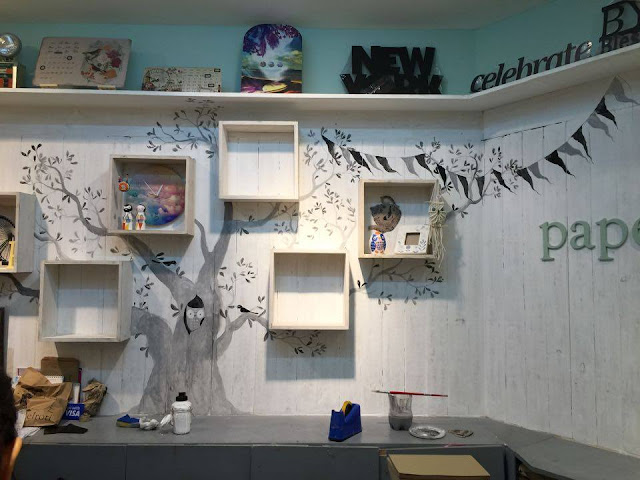 Robert starts painting the big tree - he remembers the big acacia trees in UP Diliman.

On the other wall (where the Papemelroti logo / brand is), Robert wanted it quite sparse and "airy". Robert decides to put two box shelves - one incorporating a tree and the other is like a mini table. 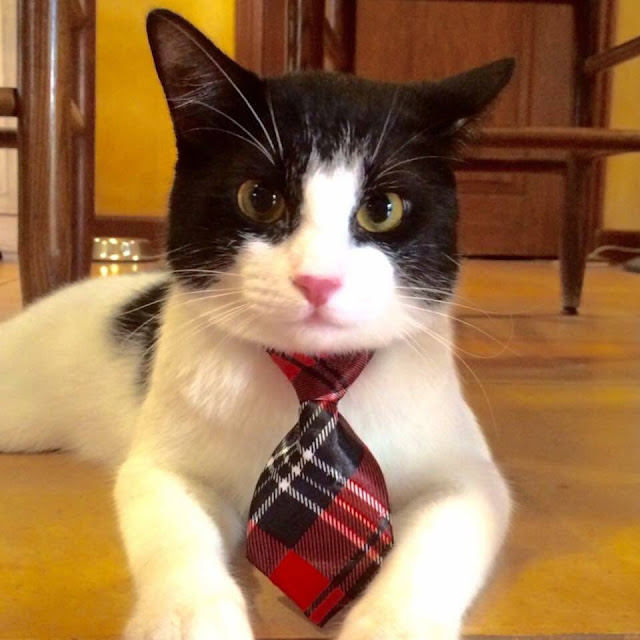 It has become a bit of a "tradition" that our store murals will feature Oreo the cat - he is the CEO of Papemelroti. Robert will have Oreo use one of the box shelves as his little table. 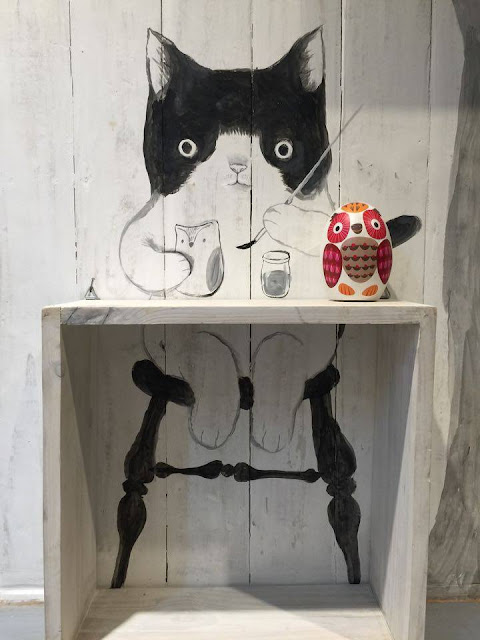 Robert paints Oreo (he looks at Oreo's Facebook pictures to help him out). Does Robert use a pencil before painting? He has done this quite often and he doesn't feel the need to! 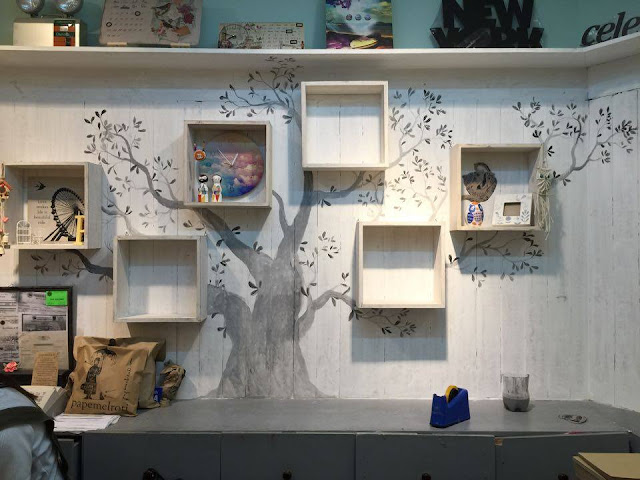 Robert uses acrylic paint to create the mural. He has also decided to make the mural with shades of black, white and gray - this is so that the mural doesn't get "too busy" with colors. Robert wants the products of the store to shine, rather than the mural he is making. 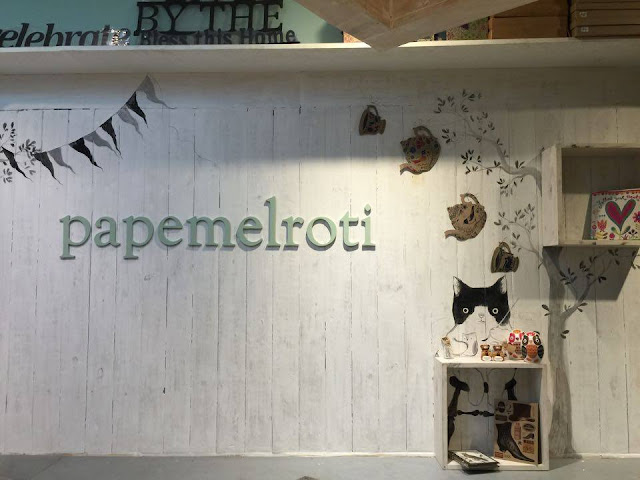 The next part is painting the leaves. This is the part Robert doesn't enjoy too much - it's a lot of leaves and it's tedious. Without the leaves, the tree looks spooky. 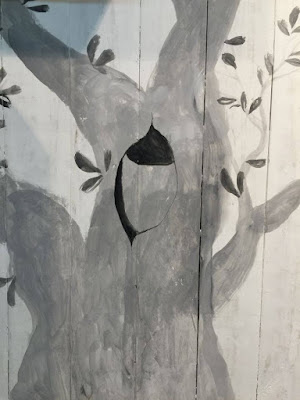 And this is the part Robert enjoys most - painting in the details. Robert paints in an owl peeking through his home in the tree and there are two birds on the branches saying hello to the owl. Robert is a birdwatcher and he enjoys drawing birds. 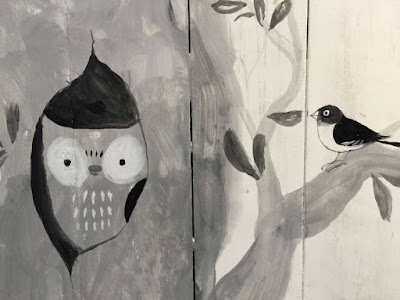 Robert adds buntings and he paints them like there is a cool breeze making the buntings flap. 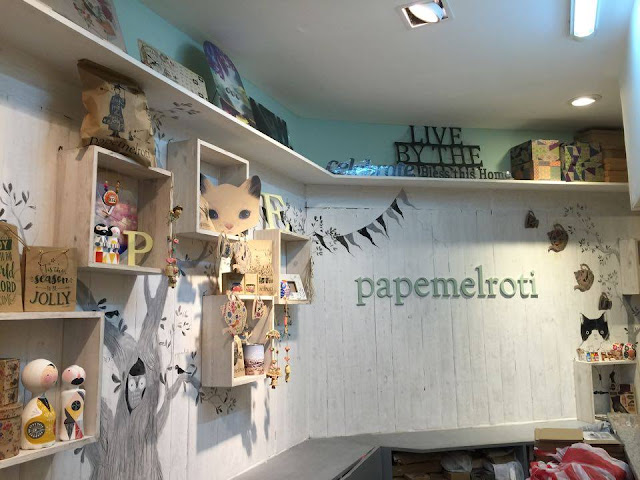 Finally, Robert fixes the products on the box shelves. It took a whole afternoon to finish the mural. What do you think?